My, oh, my!
What a crazy Thursday in the life of a Bourbon Street muse.
Due to an illness with another staff member, I wound up working all night and day, so I missed the giveaway post.  Sorry, cats.  But, back to business.  The show, as they say, must go on!
WE HAVE A WINNER!
Congratulations, Tilby Noir! You've won paperback copies of ANANSI BOYS and LIVING DEAD IN DALLAS!  Thanks for taking time to leave a well-thought out answer.  Send me a private message for shipping instructions, and we'll get your books to you soon!
A spooky prize every day this month to celebrate the upcoming TRANSMUNDANE PRESS release, AFTER THE HAPPILY EVER AFTER.  Featuring authors from all over the world, this anthology explores what happens to fairy tale characters after their roles in the stories everyone knows and loves.  Cinderella, Snow White, Little Red Riding Hood, Jack and Jill, Bluebeard—they're all here, sorting out their lives after the credits roll.
Future posts will include excerpts from the stories, author interviews, and other insider information.
We're launching a kickstarter on October 15th to help pay our contributors a little extra, beef up our marketing, and donate to one of our favorite charities, Scares that Care.  This campaign will feature the official cover release, exclusive stories, more giveaways, and other fun surprises.
Back to our giveaway.
We're celebrating October by giving away horror books, DVDs, blu-rays, and other terrifying goodies everyday this month.  Subscribe to this blog so you never miss a prize, or just check in daily to see what it is we're giving away.
All you have to do is LIKE my author page, LIKE the giveaway post, and COMMENT depending on what the daily post prompts.  Want more ways to win? Simply follow suit on the TRANSMUNDANE PRESS and ALISHA COSTANZO's author page or subscribe for more chances.
We'll post winners daily on all of our social media, and prizes ship out at the end of each week.
Since yesterday was crazy, and I missed the giveaway post, today we'll have two prizes, two questions, and two winners!
DAY 6 PRIZE: 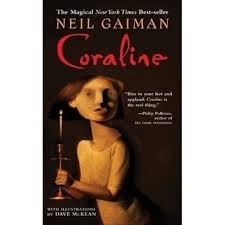 "Coraline discovered the door a little while after they moved into the house. . . ."

When Coraline steps through a door to find another house strangely similar to her own (only better), things seem marvelous.

But there's another mother there, and another father, and they want her to stay and be their little girl. They want to change her and never let her go.

Coraline will have to fight with all her wit and courage if she is to save herself and return to her ordinary life.
AND
THE THING (DVD).  Special thanks to MIKE CAPPO and the TICKLERS MUSICIANS FLOOD RELIEF FUND for this prize. 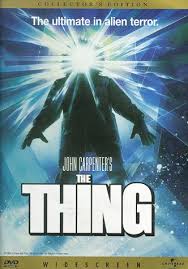 It's the first week of winter in 1982. An American Research Base is greeted by an alien force, that can assimilate anything it touches. It's up to the members to stay alive, and be sure of who is human, and who has become one of the Things.
That’s right, two prizes, lovers.  Sorry again that I couldn't get to the old machine to get the post up.
Playing pays, so enter to win!

I love this book—really anything Gaiman.  To me, this is his take on ALICE IN WONDERLAND, another favorite that has been retold and redone a million different ways over the years.  Often the stories we love are retellings of older tales.  The 1965 book THE WARRIORS (Sol Yurick) is based on Xenophon's ANABASIS.  The Coen Brother's film O BROTHER, WHERE ART THOU is a riff off Homer's epic poem, ODYSSEY.
The AFTER THE HAPPILY EVER AFTER submissions included several savvy retellings that made us reconsider what the project was about and broaden the subject matter from only stories about life after the fairy tales to include retellings and eldritch fairy tales that could be their own source material down the road.
To enter for this prize, let us know what your favorite retelling of a classic is, especially if it was hidden or skewed with a new, fresh story.

John Carpenter's 1982 masterpiece was hated by critics when it first came out.  The violence was considered excessive, and the ambiguous, nihilistic ending left many viewers freezer burned.  Carpenter considered this movie a failure, and took the bad reviews hard.  But time has a funny way of remembering things.  The movie is now considered one of the scariest films of all time, and rightly so.  The special effects are unlike anything ever committed to celluloid.
To enter for this prize, let us know what films or books are still scary even though you've seen or read them multiple times and why.
Good luck, cats.  Cheers!
Posted by Unknown at 1:35 PM