A New Year--Promises to Break

Time has a way of tricking reality.

Sorry I haven't posted as often as I would like.  Between bartending, editing UNDERWATER, gathering submissions for AHEA, marketing SYNCHRONY, writing and making music, and studying film, life has sort of slipped into a grind for me.

So, Let's start with writing:

UNDERWATER is coming along nicely.  We have solid edits of all the stories and are looking at a cover reveal on the 28th of this month (January) followed by our release on Monday, February 29th, leap year.

The other night, Alisha and I edited via Skype for 4 hours.  She confessed the next morning that she dreamed of editing, and, truth be told, so did I.  On the plus side, we've found that Skype provides a fast way to handle the stories.  We cut up and have fun, so it really doesn't seem like work.

AHEA submissions are raining in.  The deadline for entries is February 20th, 2016, but by my count, we have 23 tales as of this posting.  I won't start looking at them until after the 20th--that way, I can finish my entry without external influence and get an overall sense of the anthology's tone.  Some stories will naturally fit together than others, but if we get enough submissions, perhaps there will be books in our near future.

Time, again, is our master.

SYNCHRONY continues selling more physical copies than electronic, and I'm OK with that.  It's neat signing the actual book.  I'm sending some copies out in the mail today, hitting several different states.  It's interesting seeing my love letter to music and Orpheus starting to spread.  Polluting minds, one page at a time.

This is a magical time in New Orleans.  Carnival is in full swing, with last Saturday's Krewe du Vieux bringing the crowds to the Quarter and Marigny.  Even though I worked, I managed scoring two royal decrees and a rum writ, featuring an official wax seal stamped with skull and crossbones.  I also found my fist doubloon of the season, but I seemed to have misplaced it at the moment. 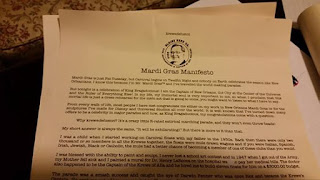 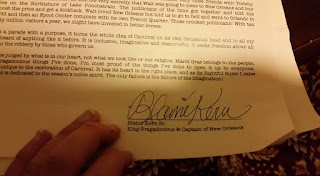 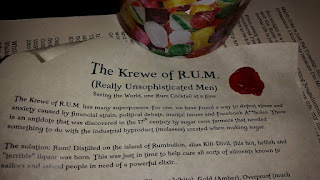 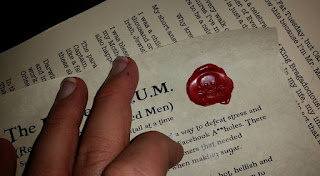 I've been learning piano and Ableton software, slowly beginning to write beats.  I haven't written techno since the late 90s, but I love underground dance so much that it seemed the time is right start creating some new tracks.  Really my ultimate goal is write soundtracks to horror movies that don't exist, hitting all the major sub-genres: zombie, slasher, vampire, werewolf, UFO, etc.  I plan on including some dialog created specifically for each album and having me and some collaborators record the scenes, but that is down the road.  For now, I'm going to write some horror-inspired tracks, sampling my favorite video nasties.

Cool, cats.  It's been fun catching up.  I've got to get back to the pen, so until the next, lovers.
Posted by Unknown at 6:14 AM No comments: