We have a winner!
Congratulations, Dimitra Nikolaidou.  You've won LIGHTNING by Dean Koontz!
TransmundanePress is giving away a prize every day this month to celebrate the upcoming release of our AFTER THE HAPPILY EVER AFTER anthology.  This collection of fractured fairy tales explores what happens after the clock strikes midnight and life for the heroes and villains carries on.  Future posts will include excerpts from the stories and other insider information.
We're launching a kickstarter on October 15th.  Our goal is to help pay our contributors a little extra as well as donate to one of our favorite charities, Scares that Care.  This campaign will feature the official cover release, exclusive stories, more prizes, and other fun surprises.
We're excited to share this amazing project with readers and genre fans alike.
And back to our giveaway.
Every day this month, we'll be giving away horror books, DVDs, blu-rays, and other terrifying goodies.  Subscribe to this blog so you never miss a prize, or just check in daily to see what it is we're giving away.
All you have to do is LIKE my author page, LIKE the giveaway post, and COMMENT here what your favorite vampire movie is.  Want more ways to win? Simply follow suit on the TRANSMUNDANE PRESS and ALISHACOSTANZO's author page or subscribe for more chances to win.
We'll post winners daily on all of our social media, and prizes ship out at the end of each week. 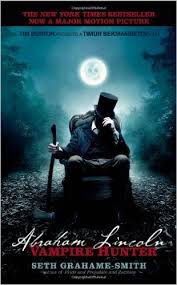 Indiana, 1818. Moonlight falls through the dense woods that surround a one-room cabin, where a nine-year-old Abraham Lincoln kneels at his suffering mother's bedside. She's been stricken with something the old-timers call "Milk Sickness."

"My baby boy..." she whispers before dying.

Only later will the grieving Abe learn that his mother's fatal affliction was actually the work of a vampire.

When the truth becomes known to young Lincoln, he writes in his journal, "henceforth my life shall be one of rigorous study and devotion. I shall become a master of mind and body. And this mastery shall have but one purpose..." Gifted with his legendary height, strength, and skill with an ax, Abe sets out on a path of vengeance that will lead him all the way to the White House.

While Abraham Lincoln is widely lauded for saving a Union and freeing millions of slaves, his valiant fight against the forces of the undead has remained in the shadows for hundreds of years. That is, until Seth Grahame-Smith stumbled upon The Secret Journal of Abraham Lincoln, and became the first living person to lay eyes on it in more than 140 years.

Using the journal as his guide and writing in the grand biographical style of Doris Kearns Goodwin and David McCullough, Seth has reconstructed the true life story of our greatest president for the first time-all while revealing the hidden history behind the Civil War and uncovering the role vampires played in the birth, growth, and near-death of our nation.

This is a new copy of the movie tie-in edition.  A book that started the monster mashup craze, this fun novel cleverly wraps the life on one of America's favorite presidents with an adventure story filled with vicious bloodsuckers.
Enter to win!