Last night, I had the privilege of working at Lafitte's Blacksmith Shop.  I picked up the shift as a bar back, but it got so crazy that they allowed me to serve until we beat back the crowd.  This now means that I have served drinks in the largest nightclub and oldest bar in the country.

After we shut the doors, I got to tinker with a cellphone ghost radar.  For a while it showed nothing, but when the building settled, and Bourbon Street emptied, we started getting blips on the radar.  The program would display words randomly—conversations with the dead.  We got CORN and VARIETY several times.  Other words that appeared were HAT, DIFFERENT, EASY, and SMOOTH.  Who knows what the spirits were trying to say.

Thanks for the night, cats.

I'll be at my normal bar for the rest of the weekend.  Last night was the dress rehearsal—tonight the madness starts.

We got the first piece of interior art.  It's called "Porcine Problem Drinkers." 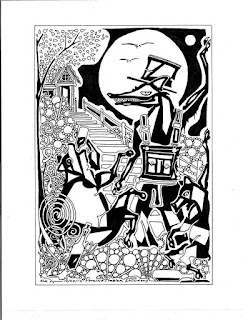 We want to include a lot of art, but we need help.  Check out the AFTER THE HAPPILY EVER AFTER kickstarter before time runs out.  We're still tinkering with its layout, so give us a look.

Click here to support the project and our contributors.

Managed to get 60 words out in the CAMPING TRIP prologue yesterday.  I'm pretty sure the words are in their correct order, too.  It doesn't sound like a lot, but I also got the giveaway post up, read from my pleasure book, played guitar, and worked 14 hours.  Feels like an accomplished day.  This weekend will sap a lot of time, but I plan on finishing the section and have it up for Halloween to officially begin #closingcircles.

THE PHANTOM OF THE OPERA action figure by Reaction.  Since no one answered yesterday's question, the ALIEN blueray and CASTAWAYS paperback by Brian Keene are also include in this package.

To enter let me know what music haunts you.  Post a video in the blog comments or on the facebook posts where this contest appears.