I am a notorious plotter, creating D&D-style character sheets for the players and planning out events chapter by chapter so when I actually write the story, I have a clear roadmap outlining the chain of events.  This approach cuts the fat and gives the tale a concise trajectory.  Granted, surprises still develop during the line laying and paragraph building, but, for me, the entire process is much smoother when the ultimate destination is in sight.

Usually, my first ideas center around the WHAT IF?  Here are some WHAT IFs that I plan on developing for future projects:

WHAT IF a dryad—in human form—seduces a man she meets in a club only to find out he's a womanizing lumberjack?

WHAT IF dense fog covers a city, and the people living there discover another civilization living in the clouds?

WHAT IF a child sent to live with his old sailor grandfather discovers a sea nymph tucked away in his bedroom?

All three of these WHAT IFs were at some point kindling, the essential sparks to projects I now have in various stages of completion.  I have a notebook filled with these WHAT IFs, and it's an intolerable frustration knowing that some of them will never grow beyond simple musings of a preoccupied mind.

After committing to a WHAT IF idea, and I know it's going to be (or I'm aiming for, sometimes it doesn't work out as planned) novel length, I dedicate an entire notebook to the project. 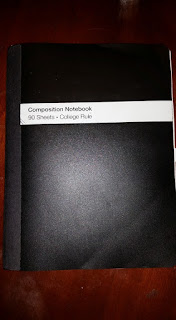 I used to jot ideas on bar napkins, order sheets, loose leaf pages, and whatever else was in arm's reach, but all too often I lost these scraps. 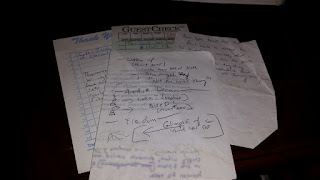 While I still take notes on anything and everything, I get them into the notebook ASAP so I don't lose work.  It's so much easier to keep track of everything once it's together.

From there, I begin fleshing out characters.  Often I base my fictitious characters in reality, taking bits and pieces of everyone I meet.  Everyone is motivated by different things, be it love, greed, sex, money, fame, food, survival, drugs, etc., and I try to keep this in mind when forging players.  In order to prevent characters from being too static, I try to assign each one with multiple motivations.  If one is just always out to get love, then they seem to stagnate, not actually growing even if they achieve their goals.  Real people are complicated messes.  We not only reach for long-term goals, but often are consumed by fleeting passions.  This offers room for improvisation during their arcs. 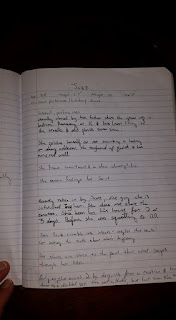 When the core cast taking shape, I'll begin another section of the notebook filled with observations: snippets of dialog, impressions of the locations I plan on using, overall ideas, of ideas I may or may not etch into stone during my chapter plotting.  This gives me a playground, a palette for experimentation and discovery. 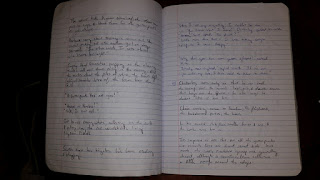 This leads to locations, settings and the like.  I love walking, and since my next book is set in New Orlenas, there are tons of places that catch my eye as possible locations for the story. 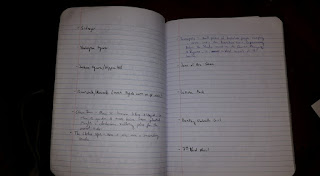 Next, I outline the chapters, getting a sense of the novel's flow. 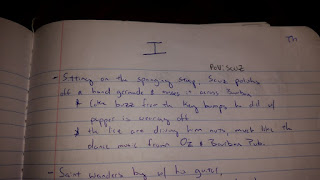 This allows me to boil each chapter down to their essence, making clear whose point of view (POV) I'm writing in.  If something seems like it's taking too long, too ambitious, or seems to be jumping POVs (head hopping), I can break it down into smaller chunks.  This will be rewritten several times, eventually landing on index cards so I can move the events around for clarity and continuity.  It's basically storyboarding, but without pictures.

All of this takes me a long time.   I usually begin the notebook while another project nears completion.  These notebooks are what Bibles are to TV shows, so when I plop down in front of the monitor and write, it's basically typing.  After I get it typed up, the work goes through an intense editing process, but more on that later.

In the future, I'll detail each of my planning steps at length.  I'm not saying this is the only or right way to write, I have found that it helps me.

Sound off: how do you approach projects?  Comment below, I'm interested in hearing what you have to say.
Posted by Unknown at 4:54 PM