I'm letting readers into my writing process as a way to let others see how I work.  I'm encouraging readers to comment in this blog and call out any mistakes and typos they see as well as offer any suggestions on clunky lines or devices.

It's amazing how different something is away from the computer screen.  Whenever I am editing my work or a piece for a Transmundane Press anthology, I print up the story and work on the hard copy with highlighters and different colored pens.  Getting away from the electronic glow helps me find more issues.  Try it with your work and see if it helps.

I printed the prologue I posted yesterday and brought it to work, editing before it got too busy.   I found some problems that needed smoothing: 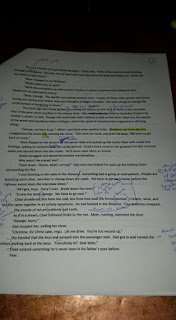 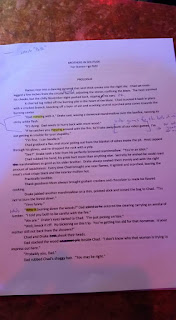 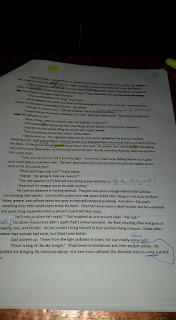 A brief list of erratum (errors found in printing or writing)

As you can see, the word "both" was unnecessary and repeated.  It helps to be on the lookout for little bastards like this.  There's a bunch of them, and they sap the life out of your writing.  In a future post, I'll list a bunch of words that easily slip out, but need to be omitted for stronger, elevated language.
* When Mom tells dad that they have to go, I had him agreeing blindly.  Also, Chad heads to the van without any cues.  You'll find in the new draft that these moments are cleaned up with more spooky tension.
* Bring the vague into the definite: a few => two

There was more cleaning up, but these were the biggest mistakes that needed to be covered here.  Below is the next draft of the prologue.  I'm the type of writer who beats the hell out of the work, sometimes too much.  Adelle calls it "fucking the devil."  I'll try not to do that with this book, but if you see anything else, let me know in the blog comments.  Your steady eye and comments are appreciated.  Thanks for reading and being a part of this story.

CLICK HERE TO CONTINUE READING
Posted by Unknown at 4:12 AM