Every step of the publishing process takes passion and hard work.

When the spark of divine creation originating from the Great Unknown diffuses through you and lands on the page, the brick-laying, paragraph building part of the gig can be damn near orgasmic, especially when the ideas are flowing easily.

The real craft, however, is editing.  When Hemingway wrote that "There is nothing to writing. All you do is sit down at a typewriter and bleed.", I think he was really talking about editing.  Most people have no problem letting the words spill, but killing your darlings and striking off entire chapters and characters because they are too flashy or unnecessary can sometimes seem like self-mutilation.  Talking is always easier than listening.

But the writing and editing only make up the raw materials of the book.  After the divine bleeding ebbs, a book heading for publication must be designed, inside and out.

This post is about mistakes that often lurk in the spaces between your writing and what you can do to address them.

As a relentless planner, I know where my story is heading before ever setting pen to paper.  When I actually sit down and smash the words together in a furious blizzard, my word count--depending on how much time I have--ranges from 3,000 to 10,000 words a day.  During this whirlwind typing, I'll often hit unnecessary keystrokes, resulting in what is called HIDDEN MONSTERS--typos you cannot see on the document unless you hit the show/hide option in the formatting toolbar of MS Word.

Once the document is in this mode, every keystroke is attributed with a symbol.  Extra spaces, paragraph breaks, and anything else that might be hard to discern onscreen will have a visual representation.

Here is what it looks like in the actual document I found from an article on the subject.

This writer does not know how to use the paragraph design option on Word.  The extra space in front of one of those extra space is also visible.

When I compiled the first volume of BETWEEN THERE, I did not realize how important this was to the publishing process and did not zap the invisible monsters hiding in the total document.  Since the file I submitted to PULPWOOD PRESS was a Frankenstein blend of all the contributors' work, some were more demanding on formatting than others.  Each file was individually copied and pasted into my manuscript from their sources without an overall cleaning, and the book hit the program that communicates with the printing machines riddled with unseen mistakes.

The proofs came back a total disaster.

The screenplay featured in BETWEEN THERE vol 1 was knocked entirely out of format.  Some of works had been crafted without checking the  “Don’t add space between paragraphs of the same style” box, causing some of the stories to look like a jigsaw puzzle with pieces missing instead of a beautiful, cohesive combination of paragraphs. 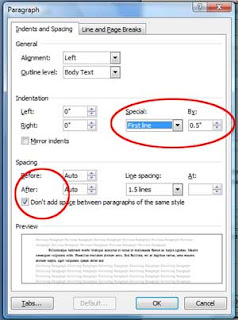 Other stories did not have the indentation feature's special "first line" set, and they his the TAB button, causing the first line to begin in the middle of the page.

At the time, I had no idea what had happened.  It took some poking around on the internet and talking with other authors before I figured out my mistake.  The manuscript needed sifting.  Each paragraph, line by line, was examined for invisible monsters and cleaned up.  Special Thanks to MICHAEL LISTER for helping me clean up the manuscript and getting it together in time for its Halloween publication date.

The proofs for BETWEEN THERE vol 2 were a lot less painful.  Where as the erratum list for vol 1 was several pages, Volume 2 only had a few internal issues.  Taking time to do it right the first go around paid off, but it took a giant mistake to open my eyes.

Be mindful when you're editing.  Make the show/hide button part of your process and hopefully it will ease the road to publication for you.